Weekly jobless claims continue to fall with the most recent reading (for the week ending on May 21st) coming in at 406,000.  The prior week's number was 444,000, which was the previous low for this cycle.  As we have talked about in the previous commentary, the previous recession highs were around 600,000 for weekly claims, so we are now well below that number.  However, the worst of the employment numbers during the most current recession peaked in late March with weekly claims coming in at north of 6,000,000 or 10x worse than the 2008-2009 Great Financial Crisis!   One significant change coming to the labor market is the announcement by 21 states that they will no longer accept Federal supplement unemployment aid starting in mid-June through mid-July, including several large states like Texas and Ohio.  These 21 states account for 35% of the US workforce.

To date, most of the labor improvements have been in middle- and high-income earners, while low-wage workers continue to fall behind.  As the economy continues to reopen and enhanced unemployment benefits phase out,  we think that there will be a continued improvement on the labor front over the next 3 months, which should continue to buoy the economy and markets in kind. 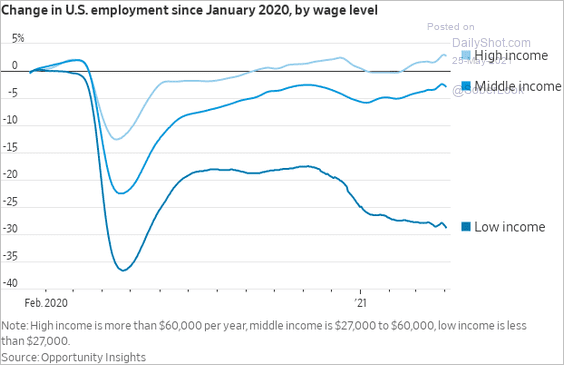 Furthermore, many states have announced that they will allow schools to reopen with full in-person instruction starting in the fall.  One of the drags on the labor market was the fact that many parents were forced to become full-time childcare workers, which either reduced productivity or forced people who otherwise would have been working out of the labor pool.  One hedge fund, Brevan Howard, estimated that 4.3 million US workers left the workforce last fall due to lack of childcare.  This should be another tailwind for employment and labor figures broadly.

All told, we are still very constructive on the cyclical and reopening themes that we have implemented in our portfolio.  If you would like to ask specifically about the changes we have made, please feel free to call or email us to set up a time to discuss.

Gordon Asset Management, LLC is a registered investment adviser.  Information presented is for educational purposes only and does not intend to make an offer or solicitation for the sale or purchase of any specific securities, investments, or investment strategies.  Investments involve risk and, unless otherwise stated, are not guaranteed.  Be sure to first consult with a qualified financial adviser and/or tax professional before implementing any strategy discussed herein. Past performance is not indicative of future performance.